You are here: Home / Blog / Driving Around Pedestrians — Do’s and Don’ts for the Driver

All drivers have a duty to drive carefully and follow the law. When drivers act negligently, accidents happen. It is important to exercise due care and be aware of your surroundings especially when pedestrians are around. To prevent accidents from occurring, here is a list of steps you can take when you are driving around pedestrians. 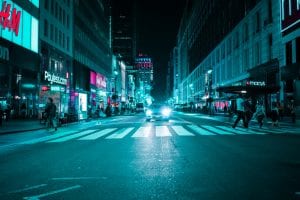 Do: Slow down when around pedestrians.

Excessive speed is one of the most common contributing factors in collisions with pedestrians. The faster you drive, the quicker your reaction time needs to be—the less time you have to apply the brakes and to swerve out of the way, and the less time you have to scan your surroundings for pedestrians. When you drive too fast, any errors in driving are magnified. A second of inattention is more dangerous at higher speeds because the car covers a greater distance while you are distracted. If you over-correct in your steering, you veer further from the intended path the faster you’re traveling. Excessive speed also contributes to the severity of the accident. The force with which two objects collide is a function of two things: their mass, or size, and their acceleration—that is, their speed. And it’s been calculated that an accident between a pedestrian and a car going 20 mph has only a 5% chance of being fatal. But one traveling at 30 mph raises the likelihood of death to 45%. An additional 10 mph puts the likelihood of death at 85%.

What exactly defines a crosswalk? Most people assume, incorrectly and unfortunately, that a crosswalk is by definition clearly marked with solid white or yellow lines—or, recently, with flashing lights—and that cars must only yield to pedestrians when crossing these explicitly marked paths. Not so. Only a small percentage of crosswalks are explicitly marked. In every state in the country, a crosswalk is said to exist at every intersection at which streets meet at right angles, in addition to those that are visibly painted or otherwise indicated in the middle of the block. These so-called “implicit” crosswalks at intersections require drivers to exercise the same caution and to yield to all pedestrians traversing the road. In other words, a crosswalk exists at every intersection, and drivers must always yield to pedestrians.

Do: Look for eye contact from pedestrians waiting to cross the street.

How do you tell the difference between a person simply standing on a street corner and another waiting to cross? Though there’s no foolproof indicator of a pedestrian’s intention, the most reliable answer is eye contact. Pedestrians intending to cross the street very often look for confirmation that the oncoming driver sees them. When a pedestrian is looking to make eye contact with you as you approach, or as you wait to make a turn, it most likely means that he or she eintends to cross.

Do: Watch for pedestrians before making a turn.

Again and again, drivers strike pedestrians while making a turn. When you are turning right at an intersection on a green light, for example, it’s easy not to see the pedestrians coming from behind—they’re on the edge of your peripheral vision and in your car’s blind spot. Making a left turn is also hazardous, but for a slightly different reason: the driver’s attention is most likely to be focused on finding a big enough gap in the oncoming traffic. Drivers typically make left turns more quickly for just this reason. In general, yielding to pedestrians while making any sort of turn on a green light is at least somewhat counter-instinctual. Green, after all, means “go.” Also, making a right turn on a red means that you should also look left for pedestrians crossing your path. The car next to you, which may be continuing straight ahead, might easily obscure your view of pedestrians about to cross in front of you.

Do: Give older pedestrians the time they need to cross the street.

Elderly pedestrians are more likely to take longer to cross than their younger counterparts. They may also require more time than the traffic light allows them. Unfortunately, impatient, anxious and aggressive drivers often fail to give older pedestrians sufficient time, and instead attempt to cut them off or drive around them within inches of their heels, both of which leads to accidents. Drivers must also be aware that elderly pedestrians often must make do with diminished hearing and vision. Not only does this mean that they might not detect the presence of your vehicle, regardless of how far away you are, but also that they might make mistakes. Like stepping

Do: In bad weather, apply the brakes earlier when stopping for a pedestrian.

In most pedestrian accidents involving bad weather, the driving conditions themselves were not the cause of the accident. Rather, it was the driver’s failure to take the weather into account. Inclement weather usually results in, among other things, poor visibility and slippery roads. A slippery road means uncertain breaks and maneuverability, a dependable recipe for an accident. Contrary to what most people assume, rain and snow are often the most dangerous just after they begin to fall—the oil and dust that has not yet been washed away combines with water to form a slick layer on the road. Remember that precipitation of any kind means that your car needs more time to come to a complete stop, so err on the side of caution and put on the brakes earlier than you think you need to when stopping for a pedestrian.

There are a number of important guidelines to follow when yielding to blind pedestrians. The first is that blind pedestrians, whether they’re using a guide dog or canes, should always be given the right of way, no matter where or when they’re crossing—it’s the law. The second is that you should stop your car no more than 5 feet from the crosswalk. Blind pedestrians must rely on the sound of your car in determining whether you have stopped or are continuing to move towards them. Stopping close to the crosswalk will help ensure that the blind pedestrian knows you’ve stopped and that it is safe to cross. For this reason, those who drive hybrid or electric cars, which make less noise, must be aware that blind pedestrians will have a far more difficult time detecting the presence and motion of the vehicle. Finally, do not honk or give verbal directions to blind pedestrians. It will only impair their ability to cross safely.

Do: Be especially cautious around schools or where children are likely to be.

Children are developmentally unprepared to be consistently safe pedestrians. For example, the ability to accurately detect the distance, direction and speed of vehicles by sight and sound requires a degree of cognitive development than many young children don’t yet possess. Their motor coordination also trails behind adults’, and both diminished attention and heightened impulsiveness make for a bad combination when it comes to traffic safety. There’s a reason why the proverbial child chasing the ball into the street appears in virtually every driver’s safety video. Children, especially young children, can’t be relied on to act calmly, safely and responsibly, and drivers should take extra care when they’re around.

Fourteen percent of pedestrians killed in an accident are the victims of drivers with a blood-alcohol level above the legal limit. Fortunately, it’s now common knowledge that drunk driving is exceptionally unsafe, both for the intoxicated driver as well as for the others who share the road and sidewalks. When under the influence of alcohol, our coordination, response time and judgment become increasingly less reliable the more alcohol we consume.

Furthermore, the costs of a DUI arrest are great, both emotionally and financially. Emotionally, there is the shame of being arrested, of having to go to court, of dealing with the Department of Motor Vehicles (DMV) and of telling your family, maybe even your boss. But all that, traumatic though it is, pales in comparison to the legal consequences and unspeakable guilt of taking the life of an innocent pedestrian or another driver.

Don’t: Pass when the car in front of you has stopped at a crosswalk.

This is a common scenario in pedestrian accidents. A driver approaching a crosswalk eyes a waiting pedestrian and decides to stop. The car behind him, unable to see the pedestrian crossing in front of the car, impatiently passes the conscientious driver and strikes the pedestrian in the middle of the street. Drivers are also liable to assume that the car in front of them is waiting to turn left but simply forgot to signal, so they zip around the right side and strike the pedestrian just as they’re stepping off the curb. The moral is this: when the car in front of you appears to stop in the middle of the road, don’t jump to any conclusions, look carefully for crosswalks or pedestrians and proceed cautiously.

Don’t: Stop your car in the middle of a crosswalk.

The dangers for pedestrians that arise when a car blocks the sidewalk are the same as those of a blocked crosswalk. It forces them out of their normal path and to walk either closely behind or in front of the vehicle blocking the way, neither of which are safe. Also remember to yield to any pedestrian when you’re pulling into or out of a driveway or alley.

Don’t:  Stop too close to pedestrians in a crosswalk.

The reason is a familiar one: visibility. When you pull up too closely to the crosswalk, it can obscure another driver’s view of the pedestrians. The general principle is that, when pedestrians are out in the open—rather than against a close background, typically a car—they will be much more apparent to drivers.

Driver distraction is one of the most common causes of car accidents in general, and pedestrian accidents are no exception. It’s entirely possible that the driver who struck you was distracted in the moments before the accident. What constitutes a distraction?  Changing a CD, looking for a song on an iPod, tuning the radio, fishing around for something in the glove box, talking to a passenger—these are common. But by far the most common, as I’m sure you’ve guessed, is the ubiquitous cell phone. Whether drivers are talking or texting, cell phones occupy their minds, diverting mental energy from the task of driving.

Driving can be tedious, especially if you’re caught in traffic or driving your daily route for the umpteenth time, and it’s tempting to use your phone to pass the time or get work done. Nonetheless, the research on this point is incontrovertible: cell phone use—with or without a hands-free device—significantly impairs driving performance and is one of the most common contributing factors in accidents. If your mind is driving along with the rest of you, you’ll be a better, safer driver.

The banner of “aggressive driving” covers most of the driving practices and habits that frequently cause accidents, pedestrian and otherwise. We all know what driving aggressively usually entails: tailgating, waiting to the last second to merge, cutting other drivers off, swerving across lanes, laying on the horn, accelerating rapidly, refusing to let other cars in—the list goes on. But the problem with aggressive driving extends beyond the aggressive driver. It affects how others drive as well, potentially igniting road rage or making others nervous, neither of which bode well for safety on the road. Driving defensively, on the other hand, simply means being cautious—being on the lookout, so to speak. It means using your peripheral vision, checking your blind spots, glancing in your mirrors, using your turn signal before changing lanes and—more often than not—it means slowing down.